On a day when temperature records were getting broken all over the Southland, Patricia Perez broke a record of her own: six fish caught on the lukewarm LA River. 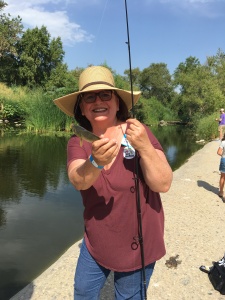 She was one of the 120 Angelinos who took advantage of Trout Unlimited’s Vamos a Pescar program to learn how to fish our urban water.

“She was the first one on the water with me this morning, “co-event organizer Ban Luu said.

Before 9 a.m., both Luu and Perez had hooked green catfish on his secret masa recipe. And before the event officially ended early at 11:30 because of the intense heat, she’d caught five small carp as well.

All fish were released successfully back into the river.