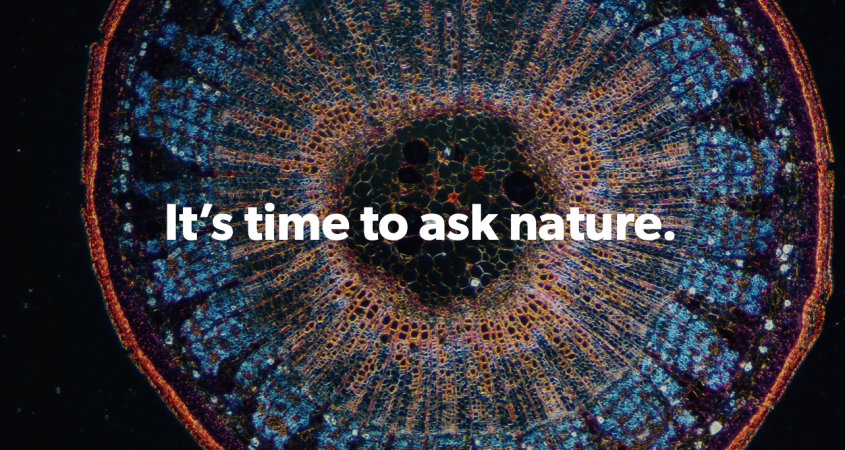 Asknature.org says “It’s time to ask nature” and after spending some time with the collection of thousands of nature’s solutions to problems, I heartily agree.

As the site proclaims, “If the history of life on Earth were put to a 24‑hour clock, humans would have been here shaping the world for mere seconds. As latecomers, it’s time to begin asking the rest of our complex planetary family how to build a more resilient, regenerative, and beautiful world.”

Click on this free online tool and type a question, “Conserve water,” for example, or “Protect from pathogens.”

This morning’s favorite was how to stop plastic pollution in rivers from reaching the ocean. The “floating coconet” mimics rows of fins inspired by the manta ray and basking shark to collect small pieces of plastic.

I know you’ve heard that before, but this time, it’s for real, done in by the Clean Water Act. After watching the Trump Administration finalize plans last week “to open up part of the Arctic National Wildlife Refuge in Alaska to oil and gas development, a move that overturns six decades of protections for the largest remaining stretch of wilderness in the United States,” according to the New York Times, I thought Bristol Bay would share a similar fate. Not so.

Check out the U.S. Army Corp of Engineers statement and be happy:

This administration supports the mining industry and acknowledges the benefits the industry has provided to the economy and productivity of this country, from job creation to the extraction of valuable resources, which are especially important as we recover from this pandemic. The Pebble Mine project has the potential to fulfill all of those needs; however, as currently proposed, the project could have substantial environmental impacts within the unique Bristol Bay watershed and lacks adequate compensatory mitigation.

Pebble Mine is dangerously close to becoming a reality.
Take action now

The U.S. Army Corps of Engineers just released its final environmental impact statement for the Pebble Mine — the last step in securing a permit for a dangerous mine in our most important salmon fishery. Take a stand for Bristol Bay and tell Congress, President Trump and the EPA to veto this project using the resources below!

Why Save Bristol Bay

For generations, this unparalleled watershed has been one of North America’s renewable resources, providing dependable employment for more than 14,000 people who are currently rely on Bristol Bay’s renowned sportfishing, hunting and outdoor recreation economy. Bristol Bay’s rich natural resources are Alaska’s economic lifeblood. Moreover, this watershed is foundational to the cultural heritage of Native Alaskans.

However, a proposed copper and gold mine threatens this unique and treasured landscape. The Pebble Mine would be one of the largest gold, copper and molybdenum mines in the world. The mineral deposit being targeted sits in the heart of salmon country in the headwaters of the famed Kvichak and Nushagak Rivers. One natural disaster could cause catastrophic damage to the watershed and wipe out the livelihoods of tens of thousands.

Minerals in Bristol Bay were first discovered 30 years ago by Canadian mining company Conoco, though it was not until 2007 when the Pebble Partnership was formed that a formal mining proposal in Bristol Bay was put forth. Soon thereafter, the environmental review process for development of the mine commenced. In 2011, the Environmental Protection Agency began reviewing the Clean Water Act 404 permit.

Through the EPA’s extensive review process, scientists found that development of the Pebble mining project would result in the following:

— 10.7 billion tons of mine waste, 20 times the size of all mines in Alaska (3,000 pounds of waste rock for every person on the planet);
— toxic mine waste stored behind a 740 foot high, 4-mile-long tailing dam – the largest earthen dam in the world, located upstream of the world’s largest salmon run;

— construction of a 100-mile road, 100-mile slurry pipeline and a power plant big enough to power Anchorage – all to open a 54 square mile mining district.

In 2017, the EPA waffled on whether to act on this science by proceeding with the Clean Water Act determination but instead vowed to carry on with the review process.

Unfortunately, the U.S. Army Corps of Engineers decided to move ahead by releasing its draft environmental impact statement (DEIS) and most recently, its final EIS for the proposed Pebble Mine. The FEIS release starts a 30-day wait period before the decision to issue or deny a permit for the Pebble mining project is made. Public comments are no longer being accepted during this process, and we could expect a decision as early as August.

This environmental analysis evaluated risks, impacts and benefits. According to the FEIS, phase one of the proposed copper and gold mine project would undermine Alaska’s thriving salmon fishery and damage 4,614 of acres of wetlands and 191 miles of streams. Many more miles of streams and thousands of additional acres of wetlands would be permanently ruined, resulting in irreversible and damaging impacts to fisheries, the ecosystem and the local outdoor recreation economy.

How You Can Help

Join Backcountry Hunters and Anglers in encouraging your lawmakers, President Trump and EPA Administrator Wheeler to conserve Bristol Bay, deny the Pebble Mine permit and stand with their constituents in protecting our economies and ensuring the future of our hunting and fishing traditions. Click here to send your message of support (at bottom left of page.)

From the Los Angeles Times: Despite its concrete casing, installed in the late 1930s to rein in once-frequent flooding, signs of the natural river persist. Besides birds of many feathers, it’s home to beefy carp, small-mouth bass, tilapia and — once upon a time — steelhead trout. If you tilt your gaze in just the right way, away from the overpasses and concrete shores, it could be Georgia.

There are grander digs to fish — rushing rivers with glittering trout in Mammoth Lakes and Kern County — but they lack one of the L.A. River’s greatest strengths: convenience.

BISHOP, California. – The Bureau of Land Management (BLM) Bishop Field Office is seeking public input for the future management of the Alabama Hills near Lone Pine in Inyo County. Today’s release of an environmental assessment lays out three proposed alternatives and begins a 30-day public review period that ends on August 7, 2020.

Set between the jagged peaks of the Sierra Nevada and the Owens Valley, the Alabama Hills are a unique formation of rounded rocks and eroded hills that encompass more than 29,000 acres of public land that is well known for its mix of scenic, cultural, geological, educational, biological, historical, recreational, cinematographic, and scientific values. In March 2019, President Trump signed Public Law 116-9 (P.L. 116-9), also known as the John D. Dingell, Jr. Conservation, Management, and Recreation Act, which designated 18,745 acres within the Alabama Hills as a National Scenic Area. The BLM is currently preparing a management plan for the Scenic Area and adjacent public lands in the Alabama Hills Special Recreation Management Area.

Implementing P.L. 116-9 is a top priority for the Department of the Interior as we work to strike a proper balance for land and resource management, increase access for hunting, fishing, and recreation, and create economic prosperity, while protecting and preserving America’s treasures.

“We welcome continued public engagement in our effort to develop a comprehensive plan for management of the area,” says Bishop Field Manager Steve Nelson. “We also look forward to completing the plan and working with the Alabama Hills Stewardship Group, the local tribe, and the Lone Pine community to implement management strategies that will ensure the long-term protection, conservation, public access, and responsible use of this magnificent landscape.”

Written comments on the proposed alternatives in the environmental assessment can be submitted via email to: blm_ca_alabama_hills_planning@blm.gov; by fax: 760-872-5055; or by mail to: BLM Bishop Field Office, Attn: Alabama Hills Management Plan, 351 Pacu Lane, Suite 100, Bishop, CA 93514.

Check out the management alternatives here.