Hot as blazes in L.A. today and tomorrow is the first fishing derby on the Los Angeles River. So, if you haven’t registered yet, click this link and get in! There are only 25 spots for anglers, and 25 spots for youngsters. Anglers cost $35; kids are free. You don’t even need a fishing license! The reason Friends of the L.A. River picked this day is because it is one of only two days during the year that the California Dept. of Fish and Wildlife doesn’t require one.

If you’re an angler, bring your own gear, and I’d bring a rod for both small and big fish. I haven’t spotted carp recently, but there have been plenty of what we’ll call smallmouth bass, tilapia and green sunfish. Also, you can wade, so bring your waders, and maybe a wading pole for more support on those slippery rocks. Fishing will be from 9 a.m.-10 a.m., with volunteers helping you get your catch to a biologist to measure and catalog before being returned alive to the river.

Water at its deepest, I’d guesstimate at 4 feet.

Now, if you’re bringing your children, remember they get in free, but you’ll need to sign a guardian waiver, which is on the registration page. The big-hearted folks at the Los Angeles Rod and Reel Club have donated all of the rods and reels, so basically all you have to do to get your children some water time is register and show up at 10 a.m. Remember, anglers from the derby will be on hand to teach the kids. I know, it’s a pretty sweet deal.

There will be a food truck on hand to satisfy our appetites.

What kind of fish might you catch on our river? My photos are missing a few species, but here we go:

If you’re in this sport, there’s a lot to worry about beyond “did I forget how to fish overnight? because I’m sure I never really knew how to cast, anyway.” That sentiment, I think, is normal. But what about:

— local stuff:  How to fix the San Gabes, which went from awesome to blown out in five years?

— statewide stuff: come on, El Niño, where is Noah when you really need him?

— national stuff: will kids get interested in flyfishing, the magical line tug, tug, tugging its way into their hearts, or will the sport fade out with us older duffers?

After fishing with Roland Trevino and his son, Max, I can scratch the last one off my list, and get back to noodling that wind knot from my overpowered back cast.

What a day we enjoyed.

“That’s it, Max, now a little more forceful, get the line to shoot out.”

When we hit the water, it was Roland who stopped and got the three of intrigued in running fry, which we couldn’t quite identify. Even with our carp gear rigged, he stopped to tie an 18 on the line. The three of us had a blast watching Max cast and the fry chase that pattern, even though it was still too big for them. Suddenly, there were three kids on the river.

Later, on the carp search, we watched as three fish jumped out  of the running water, as if a bigger fish gave chase.

“Mind if I put in?” Roland asked and just like that he’d captured and released two fish. But you could tell, his mind was on continuing to teach his son the tricks that make for solid techniques, and fun days.

“Right here, Max, stand right here,” he said, wet wading in the current. “Now, hold the line in your left hand, so you can feel it.”

Max got one tug, then another, but his timing was slightly off, so his prey stayed under water. He wasn’t discouraged.

I broke into a smile, thinking of how I’d done the same with my son, now so many years ago.

This is called “hope,” and it is beautiful to let the mind wander, thinking, once Max has caught his fair share and put on some years, maybe someday, he’ll pass along to a younger generation what he learned on the water that day.

Fishing on the river this morning, we found literally several hundred of this small fry. But the question is: which small fry? Let’s take a vote. Or if you actually can ID it, please leave a comment below. 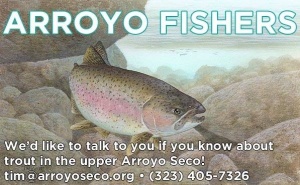 I brought my friends, Bob and Michelle, to the L.A. River for a casting lesson one day before they left on a trip to Montana and the Madison River. They were blown away by the river, as most are when the visit it for the first time.

I wasn’t expecting to catch any fish, as the moss was high and water, low.

When Michelle got the hang of casting and mending, I was showing her how to work a pool by taking a few steps upstream and — wham — a beautiful little bass smacked the crayfish pattern I had tied on.

So, her first fish on a fly rod was on the L.A. River.

“I can see how this could be addicting” was her comment between smiles.

If you look to the right of this post, you’ll see one river event we’re all pretty stoked about: “Off Tha Hook”

But there’s another fun event coming up, “The L.A. River Boat Race,” Saturday, Aug. 30 in Elysian Valley. As journo, kayaker and commenter Anthea Raymond told us, ” It’s open to anyone who knows how to paddle.”

So if you’re got a kayak, a canoe, a paddleboard, or even if you want to rent equipment to get into the water, this could be your chance to splash to a river first.

“One hundred experienced and intermediate canoeists, kayakers and SUPers will tackle a 3/4-mile stretch of the Glendale Narrows in a race for glory (and cool T-shirts and swag). Contestants compete in various age- and skill-level categories for awards and other prizes.”